July 25, 2014 by Diana Evans In Centerplate News No Comments 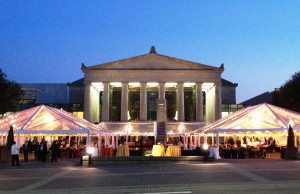 At the National Association for Catering and Events (NACE) annual award gala, Centerplate took top honors in the On-Premise Catered Event of the Year, Budget of $50,000 to $100,000 category for its inspired work creating the Greater Raleigh Chamber of Commerce 2013 Annual Meeting and Celebration.

The outdoor setting and menus reflected an innovative approach to featuring the city as the star of the event at the elegant Chamber gathering, which took place last September on the Raleigh Convention and Performing Arts Complex event campus’ Lichtin Plaza with downtown Raleigh providing a dazzling backdrop.

Three tents—complete with chandeliers and bright pops of “raspberry silk” and “electric blue” accents over white leather ‘whisper’ benches for intimate conversations—were configured to form a graceful semi-circle around the plaza’s lighted fountain, showcasing the view of twinkling downtown Raleigh and its six-block jewel box of stunning events spaces, which includes the convention center, the performing arts center, the Red Hat Amphitheater, City Plaza and Marriott and Sheraton hotels.

“Raleigh is increasingly known as a ‘foodie’ town that values and enjoys the best in cuisine,” said Mayor Nancy McFarlane. “Congratulations to Centerplate for putting Raleigh and our Convention Center at the head of the table when it comes to catered events. Having enjoyed many events at the Raleigh Convention Center, I know this award is well deserved.”

Kate Jansen, Brad Clinton and Nick Lewis of Centerplate accepted the prize at the NACE awards gala. “We are truly honored and delighted to treat guests to a one-of-a-kind experience that shows the best of what Raleigh has to offer,” said Kate Jansen, catering sales manager for Centerplate at The Raleigh Convention Center and Performing Arts Center. “This award serves as a lovely recognition of our partnership with the Center and the community, and is a shared acknowledgment of a joint effort to “make it better to be there” for Raleigh’s guests.”

The Centerplate team at the Raleigh Convention and Performing Arts Complex has received numerous accolades locally, including the 2013 President’s Award of Excellence for the Triangle, N.C. Chapter of the National Association for Catering and Events, as well as rave reviews from visitors and corporate event planners at events ranging from refined corporate gatherings to the massive World of Bluegrass festival, which attracted tens of thousands to downtown Raleigh in 2013 and returns Oct. 3-4.