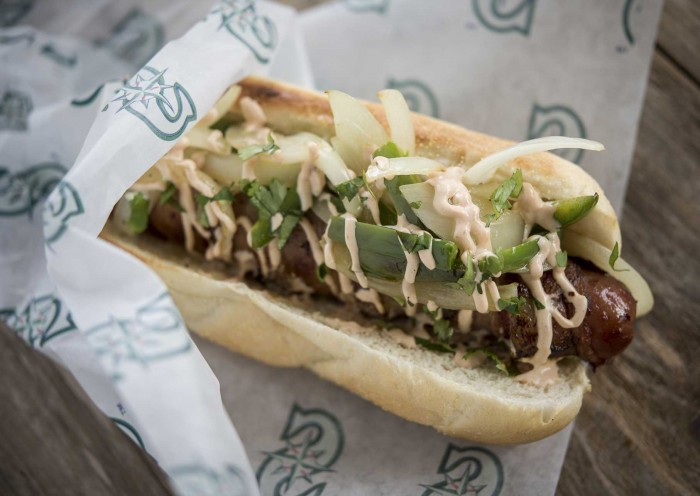 A mound of Dungeness crab meat dressed in house-made aioli on garlic butter-grilled sourdough bread is one of the menu updates fans can find at Safeco Field during the 2015 Seattle Mariners season.

Other updates include a new décor and menu at the Hit It Here Café, the addition of Pike Brewing Company beer on tap, Peet’s Coffee as Safeco Field’s official coffee provider, and an improved selection of healthier, vegetarian and gluten-free options.
Way Back Crab Shack The Dungeness Crab sandwich highlights the Way Back Crab Shack, located in center field on the Main Level (under Section 185). “Dungeness crab is one of the Pacific Northwest’s iconic ingredients,” says Stowell. “It only seems right to have this delicious food showcased at Safeco Field, for a real taste of Seattle.” Chef Stowell’s creation pairs well with the rotating selection of draft beers from Seattle’s Pike Brewing Company, which joins Safeco Field’s best-in-baseball beer selection this season.
Hit It Here Café Refresh
The Hit It Here Café, located above right field on the Club Level, has a new Northwest casual décor and updated menu featuring Chef Stowell’s version of pub classics such as Swingin’ Wings, nachos, a Bacon & Egg burger, and a selection of flatbread pizzas, including:

The Hit It Here menu items pair with a selection of two-dozen Northwest-and-beyond brews, rotated monthly. Options include Bale Breaker Brewing of Yakima, Iron Horse Brewing of Ellensburg and No-Li Brew House of Spokane.
The Natural
Fans will find an expanded selection of healthier, vegetarian and gluten-free products at The Natural at Section 132 on the Main Level. New menu items include house-made quick-serve sandwiches and fresh salads such as beet and fennel and quinoa and kale. Beverage options include Seattle’s all-natural DRY Soda, Coors Peak gluten-free beer and Crispin Cider on tap. Field Roast vegetarian hot dogs will continue to be available at The Natural as well as select stands around the ballpark.
Peet’s Coffee
Peet’s Coffee joins Safeco Field as the ballpark’s new official coffee provider. Peet’s Coffee is a specialty coffee company, founded in Berkley, California in 1966, and is committed to premium, high-quality coffee and superior freshness. Peet’s will serve a full selection of its fresh drip coffee, uniquely crafted “hot and iced” espresso beverages and hot chocolate at various concession stands and restaurants throughout the ballpark.