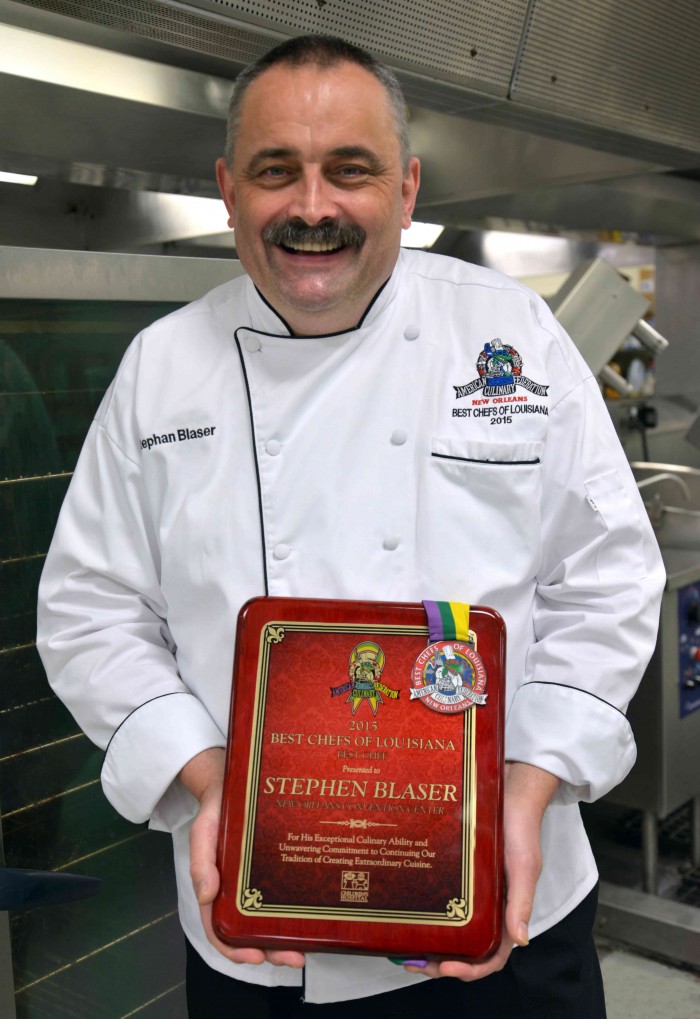 The American Culinary Federation – New Orleans Chapter has named Stephan Blaser, Executive Chef of Centerplate at the New Orleans Ernest N. Morial Convention Center, one of the Best Chefs of Louisiana for 2015.

Centerplate Executive Sous Chef  Brandon Felder was also named one of the Best Chefs of Louisiana for his work prior to joining Centerplate at the New Orleans Ernest N. Morial Convention Center.

Thirty outstanding chefs were honored at a party on April 7th at the New Orleans Downtown Marriott at the Convention Center. The event, which benefits Children’s Hospital and the ACF-NO, gives recognition to select chefs and honors them for their contribution to the New Orleans culinary scene.

Blaser has more than thirty years of experience in the Food and Beverage industry, with twenty years as a working chef in restaurants, country clubs, resorts and retail venues. In 2010, he joined Centerplate, an event hospitality partner in over 300 prominent convention center, sports and entertainment venues across North America and Europe, as an Executive Sous Chef. In 2011, he began working at Centerplate at the New Orleans Convention Center, where he rose to the position of Executive Chef.

A native of Switzerland,  Blaser is especially noted for his ability to successfully promote the inclusion of New Orleans iconic flavors in the development of menus for high volume catering and retail food operations.

“We are tremendously excited that Chef Stephan is being recognized for his culinary expertise and service to our clients,” said Richard Ginzel, General Manager of Centerplate at the Convention Center.  “New Orleans’ culinary brand is very important to our facility as it is for the city, and Chef Stephan fully understands our mission in offering our visitors a true taste of New Orleans – whether they are in our venue for a single day or longer,” added Ginzel.

As Executive Chef, Blaser’s vision for a locally influenced approach to hospitality can be felt by millions of guests who enter the convention center’s doors each year. “I am excited to  bring our guests a true taste of the world class flavors only found in New Orleans. It is an honor to be recognized by the American Culinary Federation in New Orleans.”