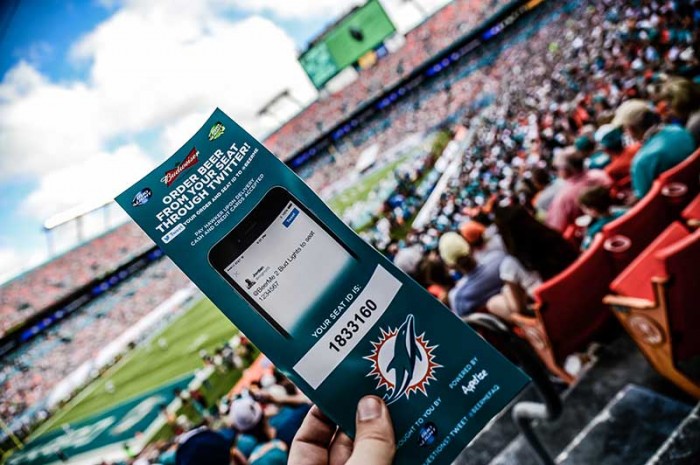 The Miami Dolphins Sunday joined Twitter, Anheuser-Busch, entertainment Point of Sale company Appetize, and hospitality partner Centerplate at Sun Life Stadium to roll out a limited trial launch of @BeerMe, an in-stadium mobile beer ordering program through Twitter that allows fans to tweet beer orders right to their seats, with cash or credit card-enabled transactions at the point of delivery.

“We are committed to the fan experience and are very excited to be the first team to bring this program to a major professional sports venue,” said Miami Dolphins Senior Vice President & Chief Technology Officer Tery Howard. “Anheuser-Busch’s vision helped bring this venture to fruition.”

“Twitter brings fans all over the world closer to the events they care most about,” said Christina Bogatsky, senior manager, brand strategy at Twitter. “Anheiser-Bush, The Dolphins and Centerplate have been a great partner in developing and launching the first @BeerMe trials and we look forward to more programs like this in the future.”

For fans, the ordering process is simple: using a personal mobile device, simply tweet an order to @BeerMe, with a unique seat ID. Each order is then routed to Centerplate’s hospitality team using a software system developed in partnership with Appetize and the Dolphins. After being validated, Centerplate dispatches an @BeerMe vendor, armed with a mobile device powered by Appetize, who brings the order to the fan’s seat, verifies ID, and completes the transaction with cash or the swipe of a credit or debit card.

“We have been working with our partners to develop an innovative ordering solution with Twitter, a platform many fans already use in their daily lives, that has the functionality we need for our operations, and is compatible with the stadium’s existing app and point of sale system” said Kevin Mitchell, General Manager of Sun Life Stadium hospitality for Centerplate. “There are many moving parts to integrate with our operations, ensure responsible service, and enable mobile transactions and convenience for guests—which we were able to do with Appetize.”

“Appetize was thrilled to partner with four industry leaders to deliver a one-of-a-kind payment experience,” said Appetize Co-Founder, Kevin Anderson.  “Utilizing our Kitchen Display System, Handheld POS devices, and Twitter integration, we were able to provide a seamless ordering process for Centerplate and, ultimately, for Dolphins fans.  Appetize is excited to now provide social ordering within its platform to engage fans in 2015.”
“To reach our goal of becoming the leading CPG company in digital, it is imperative that we pursue innovative eCommerce properties like the @BeerMe in-stadium beer delivery platform that provides football fans with the ultimate gameday experience,” said Lucas Herscovici, Anheuser-Busch vice president of consumer connections. “Anheuser-Busch continues to shape the way beer is delivered, purchased and enjoyed by working with best-in-class partners like Twitter and the Miami Dolphins to create groundbreaking programs.”